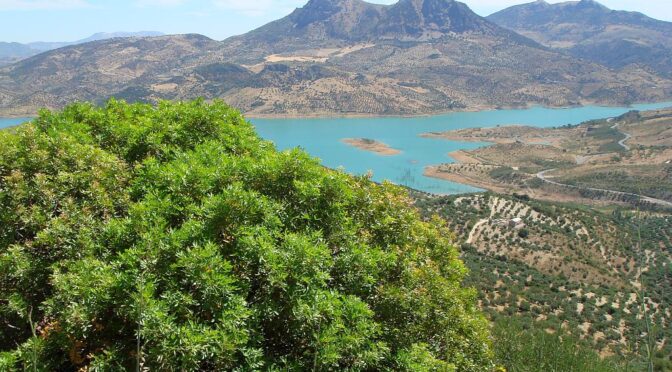 There is always a marked difference between the first and second parts of this month as plants succumb to the intense heat and set their seeds. Areas that have held high moisture levels during the winter and spring will now come into their own with ribbons of bright pink Oleanders mapping the watercourses with Penny Royal and Apple Mint accompanying them. Climbing higher, aromatic herbs tucked into rock crevices in the mountains will be attracting bees and butterflies with their nectar rich blooms. Read on for more wildlife in July in the Sierra de Grazalema

Birds gather around water sources early in the morning and during the hottest part of the day for a bath and a drink at “aguaderos”. The real challenge though, for a summer birdwatcher, is identifying juvenile birds, which very often look completely different from the adults. The Robin looks odd, in its brown streaked plumage, resembling a large wren. Blue rock thrush youngsters look like their mother: brown with vermiculated breast, in other words resembling a young blackbird in a slightly lighter shade of brown. The soon to be “rainbow-coloured” Bee-eater sports lovely shades of grey and brown on its back in its first few months.

Birds speed-feeding before setting off back to Africa for the winter are also quite a good fortune for the birdwatcher. The European Bee-Eater starts feeding voraciously after the young birds have fledged as the colony only has a couple of months, at the most, to be strong enough to fly all the way to Africa. Want to bird watch in Spain? have a look here: https://wildsideholidays.co.uk/birds-and-birdwatching-in-spain/

As the intense summer sun sends many annual plants to seed, thistles and rock dwelling plants continue to provide food for the growing number of insects on the wing. Beautiful butterflies and colourful beetles take advantage of the nectar supply of Santolina, Arenaria, Sedums, Spanish oyster thistle, Eryngiums and the strangely named Tooth-pick Bishop’s Weed. As butterflies are plentiful, to see several species feeding off one plant can be a delight.

Most of the animals around us are shy and take practice to locate. The sound of bush-crickets and cicadas chirping in the day and crickets by night will accompany your stay, you can hear them, but can you find them?

Try creeping up to the water’s edge to spy on a shy terrapin, it can be a tricky task, as at the slightest movement they dive into the water!

Reptiles are out basking in the sun and with luck they might allow us to observe their antics, but most will have disappeared at the sound of our footsteps. Reptiles in Spain here: https://wildsideholidays.co.uk/reptiles-and-amphibians/

Cork is the outer layer of bark which forms on a particular species of oak tree. The cork oak forests around us here in the Sierra de Grazalema are harvested during two months of summer.

Walk through the forest; learn how the cork is removed, its importance to the community, to the environment and, how you can help sustain it. Read about it here: https://wildsideholidays.co.uk/cork-and-its-huge-importance-to-the-environment/

A shrubby lavender species found high in the limestone mountains. The pale woolly hairs on its leaves protect it from weather extremes with frosts and possible snow in winter and harsh summer droughts. The deep violet flowers are borne on spikes which grow well above the leafy part of the plant. Distribution: Southern Spain, and cultivated for garden use elsewhere.

This is a tall, decorative plant often seen at roadsides and on rough ground. It culminates in a spreading umbel of tiny white flowers and always has a dark red centre. It might reach1.5 m but is very variable in height as well as flower size. This is a wild version of carrot from which our modern cultivars were derived. The root is edible when young. The umbel closes as the plant goes to seed, creating a natural cage. Distribution: Europe and SW Asia and naturalised elsewhere.

This is a delicate plant which can grow to around 80cm in height if amongst other plants. The stems are extremely fine and often branched. The small bright yellow flowers of 5 petals are held at the tips. They may be widespread at roadsides, in pastures or on mountainsides, although never very noticeable due to their size. Distribution: Iberia and North Africa

This is an attractive thistle which is silvery white in all parts (to 80 cm tall). It can be branched at the top, having several broad white flower heads with showy, strong and slightly curved spikes beneath. The basal leaves and those on the stem are all finely cut. Found in pastures, roadsides and woodland clearings. Distribution: Endemic to Southern Spain

A low growing plant of the “sea holly” family which can reach around 40cm in height, though often less. It can create a decorative ground cover with its silvery green leaves and pale blue flowers – which attract butterflies. The leaves are slightly similar to holly in their dentate and prickly edges. The long bracts beneath each flower head are covered in spines, these and the branched flowering stems are often the same blue shade as the flowers. Found on dry, sunny slopes. Distribution: Southern Spain and N Africa.

An upright, branched thistle to 60 cm, with fine silvery foliage and an almost white flowering stem. The flower head is composed of many blue florets and is easily identified by its spherical shape. Grows at roadsides and in pastures, sometimes covering large areas. Distribution: Southern central and south-eastern Europe, western Asia.

Below is a list of a few more July flowers to look out for in the Sierra de Grazalema.

Wildlife in July in the Sierra de Grazalema.