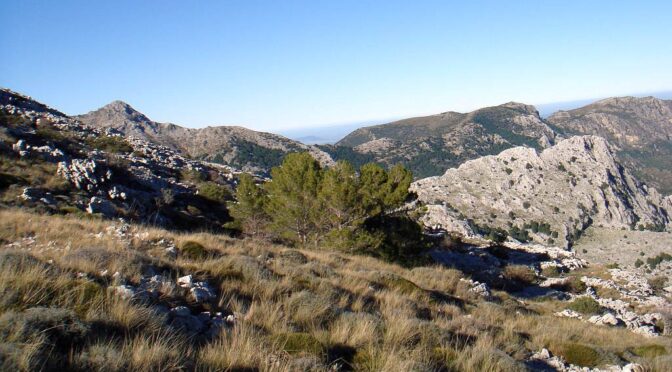 A fine way to close the year is to enjoy the fresh air and the views from a mountainside enjoying December wildlife in the Sierra de Grazalema. Surrounded by a fabulous natural park with distant views towards the Mediterranean sea and Atlantic coastline. Above there will be soaring Griffon vultures and chattering Red-billed choughs. Plants laden with berries supply ideal food for wintering birds such as ring ouzel, blackbirds and thrush.

Mistletoe is a favourite decoration in the UK during the Christmas festive season but here the berries are not white, but a lovely red! Decorative blooms of winter flowering Clematis are laced amidst the red hawthorn berries and the first Broad-leaved irises show their bright colours.

The dominant male Ibex will be surveying his herd, having battled for the privilege he can stand proudly on a rocky outcrop above them. The herd will perhaps be grazing on the shrubs and grasses, sunbathing in a comfy spot, or nimbly crossing through and over the rocks.

In streams and water troughs look out for amphibians like the Iberian Spiny toad, fire salamanders and Iberian water frogs.

Although December may bring rain and frost to the mountains it is a time of growth, spurred on after the prolonged rest enforced by the heat of summer. This rainfall nourishes the ground and triggers the flowering and fruit production of many species. This is a process which now picks up speed with more and more flowers appearing each month through sprintime and until the summer heat strikes again.

Dutchman’s Pipe (Aristolochia baetica)
This is an evergreen twinning climber that weaves its way through trees, fences and shrubs. The flowers are distinctive being a u shaped tube with a flared opening in shades of chocolate brown to purplish black and occasionaly with a creamy yellow throat. These 2 to 5cm long flowers can be seen between autumn and early spring and are then replaced by a pendant green seed capsule which splits when ripe. The heart shaped, blue green leaves are openly spaced along the stems which can reach several metres in length. Found at stream sides, road sides, semi shaded woodland edges and thickets in eastern Spain, southern Spain / Portugal and north Africa.

Virgin’s Bower (Clematis cirrhosa)
The pale nodding bells of this evergreen climber decorate trees and cliff faces through the winter, gaining height by twining their leaf-stalks around twigs and branches. The creamy white bells that are around 30mm long (sometimes with red speckles in the interior), are replaced in early spring by decorative feathery tufts connected to the seeds. The leaves are a shiny green with the overall height reaching to 5m or more, depending on the support tree. It is frequently found around the Mediterranean area favouring woods, maquis, scrub and flowering between December and March.

Bidens (Bidens aurea)
This is a fairly tall and slender perennial that can flower in the autumn with a late flush of flowers into December. The scientific name suggests that the flower colour is yellow but this is not always the case, as it can vary from white, cream to bi-coloured. It is an introduced plant that often naturalises on damp patches, to the point of becoming invasive.
Originally from Southern N. America and Central America, it was introduced to Spain, possibly for decoration but also as it has been popular as an infusion.

Red-berried Mistletoe (Viscum cruciatum)
Mistletoe is a partially parasitic plant that is well known due to its popularity at Christmastime. In Southern Spain / Portugal and north Africa the only form to be found has red berries which ripen from December to April, providing they have not been eaten by birds which is how they are transferred between host trees. Its growth style is the same as the more common white berried form, creating a dense clump on the branch of a host tree or shrub. It can be found growing on Almond, Olive or Hawthorn trees and on the shrubby Retama (Lygos sphaerocarpa). A small clump won’t damage the tree but large quantities which smother the tree will.

Field Marigold (Calendula arvensis)
When left to its own devices on fallow land or beneath orchards this annual marigold can form a low carpet of colour during the late winter months. The flowers are fairly small, 10 to 27mm and can be orange to yellow in shade. This small plant can branch out appearing to spread across open ground or become more upright amongst taller grasses. The leaves are a soft green colour and are finely toothed. They can begin flowering as early as December continuing through to the spring. It has a widespread distribution.

Southern Daisy (Bellis sylvestris)
The flowering stems on this daisy can reach over 30cm tall when in semi shade, the blooms are white with a yellow centre and are often pink on the reverse. The long oval and finely hairy leaves form a ground hugging rosette. They can begin flowering in December and continue into the spring, found at roadsides, woodland edges and seasonally damp fields and meadows. It has a wide distribution across southern Europe.

Why not discover December wildlife in the Sierra de Grazalema with Sue Eatock from Nature Plus – Grazalema? https://wildsideholidays.co.uk/nature-plus-grazalema/