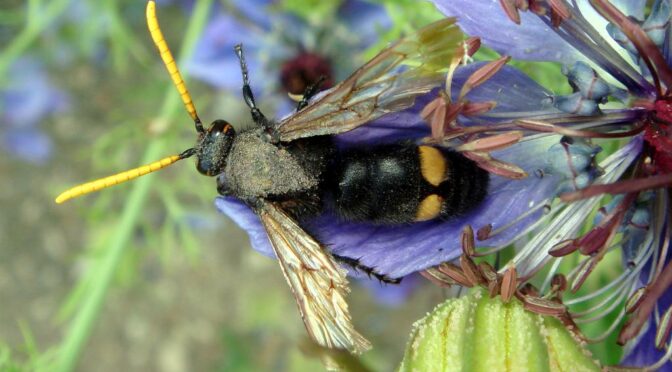 This is a very large solitary wasp, the female reaching up to 4.5cm whereas the male is a little smaller. This species appears in warm weather during late May, June, July and August.

They hold no danger to humans despite their size and black / yellow warning colours. They feed eagerly on flower nectar and this is the best time to view them.

The larger female can be told apart by her yellow face and short antennae. The male has a black head and longer antennae. Both have two yellow bands on their abdomens which can sometimes be divided to form 4 spots, which is more evident on the female in these pictures.

What do mammoth wasps prey on?

You may see several of these wasps flying around decaying tree stumps, they have a purpose here. They are searching for larvae of a particular beetle. Inside the rotten wood may be young of the Rhinoceros beetle (Oryctes nasicornis) [See image below].

The female Mammoth wasp once she has discovered the huge larvae will sting one to paralyze it and then lay her egg on the outer skin. On hatching, the larvae of the Mammoth wasp will eat into its host thereby killing it. The larva of the wasp then creates a cocoon near to the meal remains. It will stay in this cocoon over winter and hatch out once the spring weather warms sufficiently.

There are several very similar species within Iberia, including:
Megascolia bidens – always has coloured antennae, either reddish or yellow. (See image below)