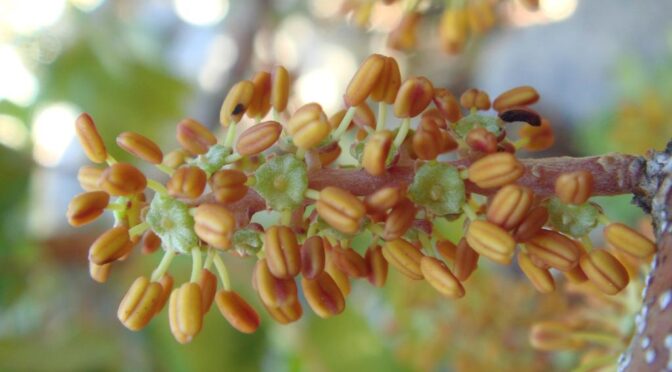 As autumn arrives lets have a look at October flowers in the Sierra de Grazalema.

Berries and acorns are ripening, decorating the countryside and providing food for wildlife. Many plants will only just be emerging as the first autumn rain will usually have encouraged the germination of many seeds by now, giving a lushness to the pastures and roadsides that had been dry during the summer.

The flowering plant seasons starts afresh as temperatures drop and humidity rises. Yellow Autumn crocus grows between the rocks close to the village of Grazalema. Narcissus cavanillesii can be difficult to locate as it is such a tiny plant, the same goes for the delicate Autumn squill. Both Autumn colchicum and Autumn crocus are more visible and although very similar in colour and form, you can tell them apart by counting the stamens (3 for the crocus).

The attractive Autumn mandrake with its large, pale blue flowers amongst a leafy rosette tends to grow in verges and fields in the valleys. Carob trees normally have male flowers on one tree and females on another, you can tell the difference by scent and colour (females smell nice and are yellow. Males are strong smelling to attract insects and are reddish) The carob beans only grow on the female tree. Smilax has a pleasant scent, but watch out for the thorns which it uses to scramble up through trees and hedgerows.

There is one orchid flowering at this time of year, Autumn ladies tresses, which has white flowers on a characteristic spiralled stem, although it only flowers if the rainfall is sufficient.

For guided wildflower and nature trips in the Sierra de Grazalema take a look at Nature Plus – Grazalema: https://wildsideholidays.co.uk/nature-plus-grazalema/

Common Sternbergia (Sternbergia lutea)
The bright yellow flowers of this bulbous plant may form a group or be in singles. Initially it looks like a crocus but it has six stamens whereas a crocus has three. The upright flowers are around 40 to 50cm long and the leaves which are just emerging develop as the flowers fade. The leaves will be dark green and strap like with a pale central stripe. They can be found in dry scrubland, grassy and rocky slopes in hills and low mountains around September and October. Spain, eastwards to Turkey (not France) N. West Africa.

Autumn Buttercup (Ranunculus bullatus)
This perennial can cover hillsides with its shiny yellow flowers. The bright green, glossy leaves form flat rosettes and the 20cm tall flowering stems hold solitary blooms. They can be seen in rocky and stony habitats, including olive groves, from October to March. Found in the Southern Mediterranean regions and Portugal. It is poisonous to livestock and therefore can spread over large areas unchecked.

Common Smilax (Smilax aspera)
This scrambling evergreen climber can reach 15metres in height by using its tough, hook like, thorns to hang onto surrounding vegetation as well as tendrils. The deep green, heart shaped leaves can be edged with further spines. In its favour are the small, delicate flowers that hang in clusters emitting a strong fragrance.(They can also be pale pink in colour). The fruit is a berry which is black when ripe and these hang in bunches. Found in scrub areas and hedgerows, flowering from August to November. Widespread distribution.

Lesser Calamint (Calamintha nepeta)
This is a medium to tall perennial plant with erect, branched stems. The flowers are small tubes set in whorls, they are pale pink or white with a few darker spots. The small oval, greyish leaves are strongly aromatic. They occur in dry habitats such as hedgerows, fallow fields and rough grassland, primarily in the mountains. This widespread plant can flower from June to November.

Southern Colchicum (Colchicum lusitanicum)
This cormous perennial has no leaves at flowering time, they appear later. The flowers which stand just above soil level (often on a weak white stem) are pale to mid pink and crocus like, with a faint chequered pattern on the outside. Their favoured habitat is in dry open fields and limestone rocky areas. They can be seen in flower from September to early November. Found in Iberia, Balearic Islands, Central Italy.

Vervain (Verbena officinalis)
Tiny pale pink flowers are clustered at the tips of tall branched stems which although slender, are strong and upright. This very wispy looking plant has many stems that emerge from the same base which is covered in small dark green, deeply lobed, diamond shaped leaves. It can reach a height of over a meter. It is found on rough grassland, stream sides and rocky ground, flowering from May to October and of widespread distribution.

Autumn Mandrake (Mandragora autumnalis)
Initially a dark green rosette of large lush leaves may catch your eye as sometimes the flowers are tucked low into the plant. On other occasions the attractive, pale, bell like flowers stand above the leaves in a showy display. This perennial plant often occurs on cultivated clay soils and fallow land as well as stony waste places and olive groves. The fruit is a bright orange or yellow egg shaped berry ripening in the following year. This plant has been noted to have a root of a similar shape to a man, giving rise to tales of witchcraft and folklore. Their flowering period is from September to December. Widespread distribution.

Rosemary (Rosmarinus officinalis)
An evergreen shrub of culinary use. It may reach 2m in height with erect woody stems bearing slim, pointed, aromatic leaves with a white underside. The flowers, which appear in clusters near the branch tips, are small and blue, although can occasionally be white or pink. They can occur in dry scrubland, open woodland and fixed dunes. Iberian Peninsular eastwards, widely cultivated for its essential oil, culinary use and ornament, including various colours and lax forms.

Common Ivy (Hedera helix)
This versatile evergreen climber is capable of clinging to cliffs and covering large areas, creating a refuge for wildlife, as well as smothering trees in a lush riverside environment. It clings on with aerial roots and can climb to around 30metres. The tiny greenish yellow flowers are scented and attract many insects. They are followed by clusters of black berries which are eaten by birds. It is widely distributed through most of Europe.

Friar’s Cowl (Arisarum simorrhinum)
This is a short perennial whose flowers are easily hidden amongst its leaves and grasses. The unusual flowers are chocolate brown and white with a curved or hooded top covering a spadix that ends in a thickened, rounded end just at the lip. The leaves are oval to heart shaped, lying close to the ground. They can be found in rocky habitats, scrub and grassland, flowering from October to May.

Autumn Crocus (Crocus serotinus)
The scented pale lilac to pink flowers have a typical crocus shape and may occasionally have a yellow throat and / or darker veining on the outside of the petals. Note that it will only have 3 stamens, a similar flower also open now is the Southern Colchicum which has 6 stamens. The 4 to 7 fine leaves are often just emerging at the time of flowering. Found in rocky and sandy areas, grassland and open pine woods. Distribution: Iberia and Morocco.

Narcissus cavanillesii – Narcissus humilis
This yellow flowered narcissus can easily be overlooked if there are just a few individual flowers as they are low growing with narrow petals and a short corona (cup), actually they hardly resemble a narcissus with their upright blooms. They can form small groups protected between rocks, or large swathes in rough grasses. There may only be a single narrow rush-like leaf per bulb. Occurring in grassy habitats and open woods. Distribution: South west Spain, NW Africa

Autumn Scilla (Scilla autumnalis)
The lilac or rose coloured starry flowers of this delicate perennial are tiny jewels which hide in the grasses. They carry no leaves at flowering time and may only stand around 20cm tall with up to twenty flowers per stem. They can be seen in dry grassy and rocky places, open scrub, fields and roadsides. Distribution: Mediterranean region.