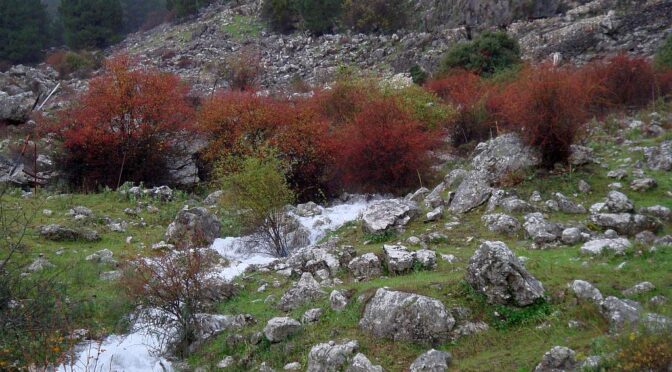 September in the Sierra de Grazalema is a good time to watch Bee-eaters, Short-toed eagles and Booted eagles on their Southerly migration.

The temperature begins to cool from the searing August heat and, if there is rain, then the ground will soften, giving way from dried straw colours to a soft green as plants sprout anew after their summer dormancy. Some of the flowers we can see now are Round-leaved fluellin, Common ivy, Fennel, Rosemary, White asparagus, Apple mint and Maritime squill. A range of fruits and berries begin to ripen, which can add a surprising splash of colour; Sloe, Blackberry, Hawthorn, Laurustinus, Peony, Turpentine Tree and Strawberry tree.

Reptiles will continue to enjoy sunbathing and snacking on a plentiful supply of insects. There are many insects which only live for one summer, they will now have reached maturity and are laying eggs which will hatch in the coming spring.

During the month of September the night time temperatures are lower, allowing plant life a reprieve and the chance of at least a few drops of moisture in the form of dew, if not a rain shower or perhaps a storm. Heavy rain tends to run off the baked ground too quickly whereas steady showers can be absorbed into the parched soil. Either way the wildlife appreciates this sign of the approaching cooler weather and autumn bulbs “spring” into life.

The leaf rosette is dry and brown at the time of flowering, although it still offers a decorative and highly defensive backdrop to the flowers. These are broad at around 5cm wide, composed of compacted pink tubular florets, the centre of the flower head is often white. Due to their reduced height, they can easily be overlooked hidden amongst dry grasses in fields, banks and roadsides. Distribution: Western and central Mediterranean area.

Autumn colchicum (Colchicum lusitanum)
This small plant grows from a corm, with the long fine leaves appearing later in spring, but not at the time of flowering. The pinkish, lilac flowers which are around 10 to 15cm tall initially look like crocuses.

On closer inspection note the 6 yellow stamens inside (a true crocus only has 3 stamens), also notice a pale chequered pattern on the tepals and a central white stripe. The stem is thin and pale, adding to the fragile look of the flower. Found on dry, rocky hillsides. Distribution: Iberia, Italy, N. Africa.

Maritime squill (Urginea maritima)
This huge bulb can grow just beneath the soil surface or even in rock crevices. The leaves which appear in late winter and spring are a dark green, fleshy-leathery and broad. These die off completely during the summer heat at which point the bulb prepares to flower.

A single un-branched inflorescence can reach over 1 metre in height. Each individual flower is small, composed of 6 white tepals with a dark central stripe. The flowering stalk and short pedicels (stems that attach the flowers) are purple in colour. All parts are toxic and so it is avoided by grazing animals. Distribution: Southern Europe, N. Africa, SW Asia, Macaronesia.

Autumn Mandrake (Mandragora autumnalis)
This is a low growing perennial which dies back in the summer months. The leaves emerge in the autumn and winter, they are rough to the touch with a slightly wavy edge and form a basal rosette. Clusters of large individual lilac, blue or whitish flowers appear from the centre of the plant, sometimes hidden in the leaves.

The five petals are joined at their base to form a bell shape. The long, thick root that can be up to a metre deep, is often divided into two branches similar in form to 2 legs, this gave the plant an anthropomorphic aspect that in ancient times increased its magical character. Found on slopes, roadsides, cultivated areas, flood plains of rivers and streams. Distribution: Mediterranean region.

The odd name comes from the plant’s ability to eject a juice from the fruit which disperses the seeds, this juice can irritate skin on contact. A common plant, often seen in poor soils on waste ground, roadsides and margins of cultivated areas. Distribution: Mediterranean region, Macaronesia

Wild Asparagus (Asparagus acutifolius)
An evergreen perennial growing to 1.5 m, the somewhat feathery looking leaves on this leggy, scrambling plant are in fact needle-like modified stems. It is related to the much plumper asparagus (Asparagus officinalis) bought in shops and is much sought after.

The fine and tender newly emerged shoots of this plant, known in Spanish as “Esparragos trigueros” are collected from the hillsides and sold in bundles during the spring. The small flowers are pale yellow or green and star like in shape. It grows in woodlands and scrub, often partly camouflaged as it clambers through other plants.