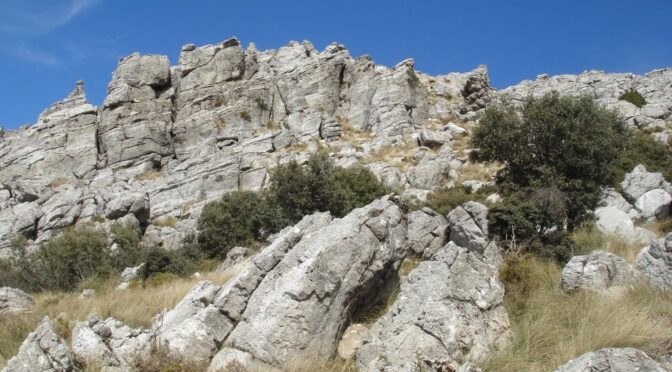 In Grazalema we are spoilt for choices between the myriad of places to visit. During a week of August day trips, a selection of the most diverse took me to historical sites, natural cave formations, a shaded woodland walk, botanic garden (El Bosque), rivers, lakes , a museum (Palacio Mondrago, Ronda) and an early morning walk above the village of Grazalema through the Sierra de Endrinal

Even the lightest breeze is appreciated when you are out and about in the sierras during August. Setting off with sun cream, hat and plenty of chilled water, even late into the afternoons the sun shows little desire to lower in the sky. The brilliant blue skies of August can be relied upon to form a beautiful backdrop to most images with occasional pure white fluffy clouds offering an interesting colour contrast.

As well as the seering heat, the most striking things at this time of year are the colours, scents and sounds. Although grasses are dry and golden many of the trees and shrubs are evergreen. Some trees and shrubs are flowering now such as the bright pink Oleander (Nerium oleander) which borders stream banks, the small Mediterranean daphne (Daphne gnidium) with its dainty night scented white flowers on the dry slopes and the unusual purple Stemless thistle that flowers at ground level (Chamaeleon gummifer).

The hot air carries the fragrance of thyme, rosemary, mint and pine resin. Look out for pine kernels beneath impressive Stone pines (Pinus pinea). The intense whirring from these and other trees is created by cicadas. An insect that spends years under ground as a larvae and just one summer in its adult stage when it lives on trees, drinking their sap.

Water is a good place to look out for creatures during the heat of the day. My priority this week was to find a wide selection of dragonflies, so I aimed for a variety of local water bodies from open reservoir, small ponds, gentle streams to flowing rivers. The most prolific was the Copper demoiselle (Calopteryx haemorrhoidalis), a delicate creature that alights on twigs besides or close to water, an easy subject to see and identify but more difficult to photograph.

Other ‘dragons’ such as the Small Pincertail (Onychogomphus forcipatus) were less camera shy and posed happily on rocks. The Iberian Bluetail (Ischnura graellsii) were numerous in certain locations, but only once your eyes were adjusted to focus on something not much thicker than a hair at ankle height! Some of the larger crepuscular dragonflies zigzag so quickly and without stopping that their colours were impossible to discern in the fading light. Read more about dragonflies here: https://wildsideholidays.co.uk/dragonflies-and-damselflies-in-spain/

Of course whilst searching for these beautiful insects I also discovered Iberian water frogs (Pelophylax perezi formerly known as Rana perezi), Mediterranean pond terrapin (Mauremys leprosa), a selection of mantids and I got distracted by various birds too.

Golden Orioles live in the tall trees near to water whilst Bee-eaters and Swallows are attracted to the airborne insects. Nightingales and Cetti’s warblers although not obvious, as when they are actively singing in spring, could be spied in the shrubs and bushes. The call of Short-toed eagles is distinctive as they chatter together in a family group flying close by getting ready to migrate south for the winter. Other birds active were Sardinian warbler, Great spotted woodpecker and several noisy Red- billed Choughs.

The cave sink hole at Hundidero connects through 4.5km of underground channels to Cueva del Gato and the path down to the entrance has recently been improved (though it is still very steep!) The cool refreshing river that flows from “cat cave” attracts many swimmers on a weekend.

Cueva de la Pileta, another natural cave, is renowned for the cave art in many of its corridors and huge chambers. A selection of historical sites with the Dolmen ‘El Gigante’ at El Gastor, the Roman ruined town of Acinipo and the Moorish tower above Zahara de la Sierra completes a week of August day trips in Grazalema

A few flowering plants in August in the Sierra de Grazalema

This is a golden month, as most annual flowers have finished their colourful phase, produced their seed heads and dried completely to a straw colour. Although if you look in the right places there are still flowers to be found; watercourses, irrigated areas, animal watering troughs, damp meadows and high mountains will offer the best selection.

Oleander (Nerium oleander)
A tall, flexible, bushy shrub growing to about 6m, that is associated with waterways, the bright pink (sometimes scented) flowers are in clusters on the branch tips.

The leaves are long and fairly narrow, they remain on this evergreen plant all year. It is wise to be cautious when handling this plant as the white milky sap released when a leaf or branch is broken can cause skin irritation and eye inflammation. All parts of the plant are toxic, even the smoke inhaled from burning its branches. Distribution: Mediterranean region, eastwards and widely used in gardening with many different coloured cultivars.

Shrubby Hare’s Ears (Bupleurum fruticosum)
This plant forms a bushy shrub which can grow to 2.5 m, although only in favourable situations. Its blue-green leaves are narrow and waxy which helps reduce transpiration.

The clusters of tiny yellow flowers are held on umbels above the leaves in summer and early autumn, they attract wasps and hoverflies. It can be seen growing in quite inhospitable places such as dry sunny limestone banks. Distribution: Mediterranean Region

Pennyroyal (Mentha pulegium)
This is a small perennial, growing to around 40cm tall. Its tiny leaves are highly aromatic, it is the source of the very popular Poleo- Menta infusion.

The clusters of pale lilac flowers are held in whorls along the stem, opening from summer to autumn, they are noted for attracting nectaring insects. It grows best in damp areas. Distribution: Southern Europe, including Britain, Mediterranean region, Macaronesia.

Common Fennel (Foeniculum vulgare)
The well known culinary and medicinal herb Fennel can grow to 2.5 m tall. The stems are hollow and branched with fine, feathery leaves. The yellow flowers are clustered on umbels, in our area you might also find smaller flower heads of a more orange-reddish colour.

We are not the only ones who enjoy its flavour, the attractively patterned caterpillars of the large Swallowtail butterfly can sometimes be found on these plants. Distribution: the Mediterranean, and naturalized in many parts of the world.

Apple Mint (Mentha suaveolens)
A perennial plant that can grow up to 1 m tall in the right conditions, it favours damp ground. The oval leaves have soft hairs on top and they are also felted with hairs beneath, thus giving rise to an alternative common name of woolly mint.

The flower spikes are made up of many tiny whitish-lilac blooms. It can be grown both as a culinary herb and an ornamental plant. Distribution: Southern and western Europe.

Purple Rush Loosestrife (Lythrum salicaria)
This is a robust herbaceous perennial with upright stems to 1.2m tall with narrow, willowy leaves. The small purplish-pink flowers are approx 2cm wide and held in dense terminal spikes, opening over a long period in summer.

Its favoured habitat is pond-sides and watercourses which allows it the luxury of a long flowering season. Distribution: widespread in Europe, NW Africa, Asia and introduced into N America.