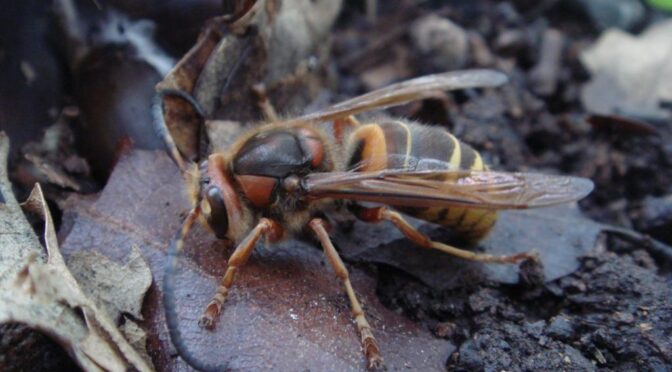 The workers are 18 to 25mm in size while the rarely seen queen is huge at 35 mm long. These impressive insects are striped in a similar warning pattern to a wasp, termed “aposematic,” which is intended to put off insectivorous animals. The upper head, antennae, wings and legs are a rufous brown. The thorax is the same brown with black markings while the abdomen is more wasp like.

They behave in a social manner, creating a nesting colony which thrives and dies in just one year life cycle.

During the spring a female (queen) will emerge from hibernation and choose a suitable position for a nest. This will preferably be inside a tree hollow but can be inside a shed or a roof space. The nest is made by collecting rotten wood from fence posts, dead trees etc and chewing this while adding saliva. The resulting paste is pliable and can be spread using her mandibles and legs to form the first cells into which she lays her eggs.

The first larvae that hatch are infertile workers and are unable to reproduce.

When they can fly and they are able to take over nest building and food collection duties, the queen concentrates on egg laying and will remain inside the nest.

The workers feed on nectar, fruit and also sap collected from oak and ash trees.

They catch and paralyse insects such as caterpillars to take these back to the nest. This high protein diet is fed to the larvae in order for them to develop and to the queen who is producing more eggs.

The larvae exude a sugary liquid which the workers can also feed on.

As the season continues the nest grows

The nest is extended by adding wider, lower tiers which are protected by being housed inside an outer paper skin, with the entrance underneath.

As long as this nest is not made where human movement will upset the colony, it should not cause a nuisance. But be advised that if you aproach to close to a hornets nest they will defend their territory!

These agile flyers can travel as far as 1500m from food to nest.

In the autumn, the nest has reached its maximum and is drawing near to the end of the hive lifecycle for this year.

At this point, rather than creating more workers, the queen lays eggs which produce male and female offspring. These remain at the nest still being fed by the infertile workers.

When they are strong enough and climate conditions are right they will disperse from the nest and copulate.

The queen of the present nest then dies, as do any remaining larvae or workers. The males also die soon after mating whereas the females have to find a suitable place to hibernate through the winter.

Each female that survives through to the spring will then begin the process of creating her own new hive community, always commencing by building a new nest and the yearly cycle begins once again.

As with other colonies of wasps and bees these insects will defend their nests. Unlike that of a bee which is purely defence, the hornet sting is designed mainly to be used to inject poison into small insects which are fed to the young and so is to be used many times.

The sting is no more toxic than that of a wasp or bee despite being from a larger insect.

It is best to avoid confrontation by not approaching the hive and these gentle giants will normally back away when they encounter you. But, if they feel threatened or are mishandled they are capable of stinging in defence.

Due to unfounded fears of attack against people these beautiful creatures have been decimated to a point of near extinction in some European areas. On the contrary, they should be accepted and left alone as they are capable of controlling a wide variety of harmful garden insect pests.

Are you looking for flights?
The dozen best breakfasts in and around Ronda
Cordoba the Mezquita and Old Town
Marbella on the Costa del Sol
Gaucin in the Genal Valley
Zahara de la Sierra Pueblo Blanco in the Grazalema Natural Park
Guided excursions and white villages of the Sierra de Grazalema
Daytrips in Andalucía from Ronda
Trams in Sevilla
Torre del Oro in Sevilla