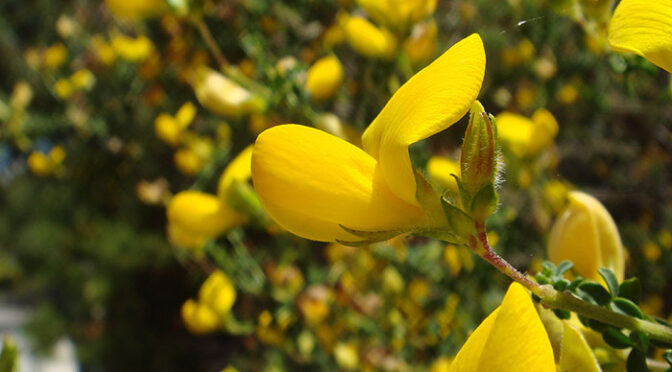 March in the Sierra de Grazalema brings more migratory birds returning back to their breeding grounds, with large groups of Short-toed and Booted Eagles passing through to Central and Northern Spain, and then “our” breeding pairs settling back home.

This is also the time when you have a good chance to spot the beautiful white and black Egyptian vultures, which are progressively rarer here in the South of Spain. There are a few breeding pairs in the Grazalema Park, however in March good numbers can be observed refuelling and resting on their flight northwards.

Most male birds will be sporting their breeding plumage by now. The spectacular bright Blue Rock Thrush, true to its name turns a deep azure, the Black Wheatear becomes an even more glossy black whilst displaying its fan-like, pure white tail and the humble Linnet starts showing a lovely bright patch on its breast, which, if you are poetically inclined, could be described as a pink heart.

One of the most sought-after species by birdwatchers, the Rock Thrush, should be back in place this month, nesting at higher altitudes than the Blue Rock Thrush. The stunning combination of the male´s blue and red plumage makes it a treat to look at. The male Black-eared Wheatear keeps up with its salmon-pink breast and black mask (including a black throat in a second variation) frequently sitting on top of dry-stone walls where it can be easily observed.

The Spanish Ibex, are roaming the mountains in search of food; especially the very visibly pregnant females which by now need a lot of nutrition and can be seen at lower altitudes munching on delicate young shoots and sunbathing on flat rocks. They will be returning to the higher more secluded slopes to give birth in April and May.

As the temperatures begin to rise towards the end of the month, crickets can be heard chirring at night, and to add to that lovely feeling of spring, there are more plants showing their colours. Some are easily seen as they stand tall and strong such as the White Asphodel. In contrast the Barbary-nut iris is dainty and only opens for a few short hours each day.

Two narcissi; Narcissus cerrolazae and Narcissus baeticus can create large yellow swathes in a few locations. Spanish bluebells look delicate here in their natural, rugged habitat and the Snakeshead fritillary, a master of camouflage, is always a lovely sight.

The terrestrial orchids can be a highlight for many, whether botanically minded or not. Giant, Sombre bee, Early purple, Bee, Conical and Sawfly orchids are ones which we will look out for.

Of course as there are more flowers opening, there are more butterflies on the wind adding that picture perfect decoration. Sporting the same bright yellow and orange colours are the large Cleopatra and the tiny Moroccan orange tip. Intricately patterned Swallowtails drift by whereas Painted Ladies on migration move swiftly on.

As shrubs begin to show colour, spring is becoming more obvious and this alters from when we enter the month with a few shy blooms, to crossing into April with the “now in flower” list ever increasing. Over the first two weeks of March, the plants in flower are scattered and you need to know where to look, during the third and fourth weeks the selection grows with colour cropping up on roadsides, pastures, rocky slopes and river valleys.

Southwest broom (Cytisus baeticus)
A shrubby, yellow flowering broom which grows to 4 metres. The flowers are in clusters distributed along the branches. The leaves are three lobed, held on short stalks along the many fine branches which are ridged and green. The short, straight seed pods are densely covered in silvery hairs. Prefers shady areas such as stream sides, also seen on mountain slopes and in cork woods. Distribution: South West Spain, southern Portugal.

Narcissus cerrolazae
(Also known as Narcissus fernandesii, possibly to be separated but not all are in accordance)
This scented, bright yellow narcissus can grow to 40 cm tall. The central cup (corona) is flared and fluted with 1 to 5 flowers per stem (most frequently 2), supported on a long tube. The erect leaves are around the same height as the flowers; they are smoothly curved on one side and indented with a groove on the other. They prefer fields that are undisturbed and very humid during the winter. Distribution: Rare and very localised, South West Spain.

Bridal Broom (Retama monosperma)
Multiple fine branches drape from this elegant shrub, during March it is smothered in small white, strongly scented flowers. Each pea type flower has a red calyx. It can reach 3 metres in height, spreading to double that in width. The few leaves soon fall from the slender green stems. More frequent in coastal dunes nearer to the Atlantic area, here it is planted to decorate the roadsides. Distribution: South Western Spain, Southern Portugal and Northern Morocco.

Three-cornered Leek (Allium triquetrum)
This small plant has 5 to 15 white flowers with a green midvein, they hang noticeably to one side. The common name comes from the odour when a leaf is crushed and the shape of the flowering stem really is three sided. Dense tufts form from tightly packed bulbs; the green leaves are smooth on the upper side with a keel (central ridge) on the reverse. They generally prefer damp, shady areas such as stream sides, ditches and woodlands. Distribution: Iberia eastwards to Italy.

White Asphodel (Asphodelus albus)
Tall flower spikes to around 1m in height adorned by white flowers. Each star shaped flower has a brown stripe on the reverse of the 6 petals. It differs from the Branched asphodel in only occasionally forming branches, its papery bracts are a conspicuous dark brown and it is more frequent at higher altitudes. The leaves are grey-green, sword shaped and in lax clumps. Seen amidst limestone outcrops and in high pastures, it is unpalatable. Distribution: Mediterranean area.

Violet Cabbage (Moricandia moricandiodes)
Small violet flowers, of four petals with a darker centre, decorate this finely branched plant. The leaves are grey / green and thickened. It can grow to around one metre tall and create large colonies, although it is often more scattered. It grows mainly in clay soils on roadside banks, field edges and uncultivated ground. Distribution: Eastern and southern Spain.

Some of the local plants in flower during March: